Skip to content
Most Read
BENGALURU: The events that unfolded on Tuesday night were something Bengaluru city police old timers hadn’t seen in a long time. For the youngsters it was a new experience. The men in uniform may have handled more widespread violence and even outbursts in densely populated pockets, but they never lasted long.

Tuesday night’s sustained guerrilla-like action against them over a fairly large grid of bylanes and narrow roads in east Bengaluru was something they hadn’t anticipated. The violence was spread over three localities — Kavalbyrasandra, KG Halli and DJ Halli — under KG Halli and DJ Halli police station limits. 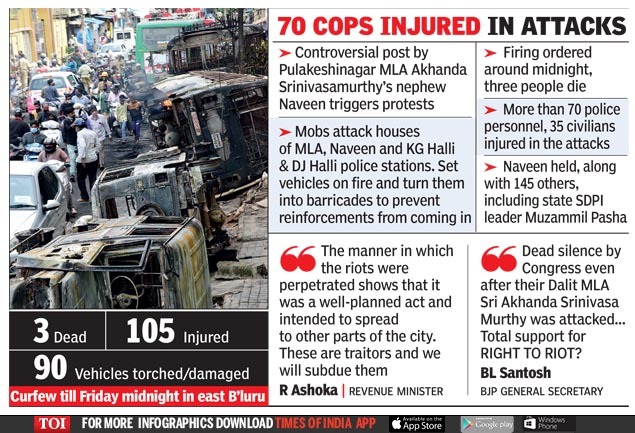 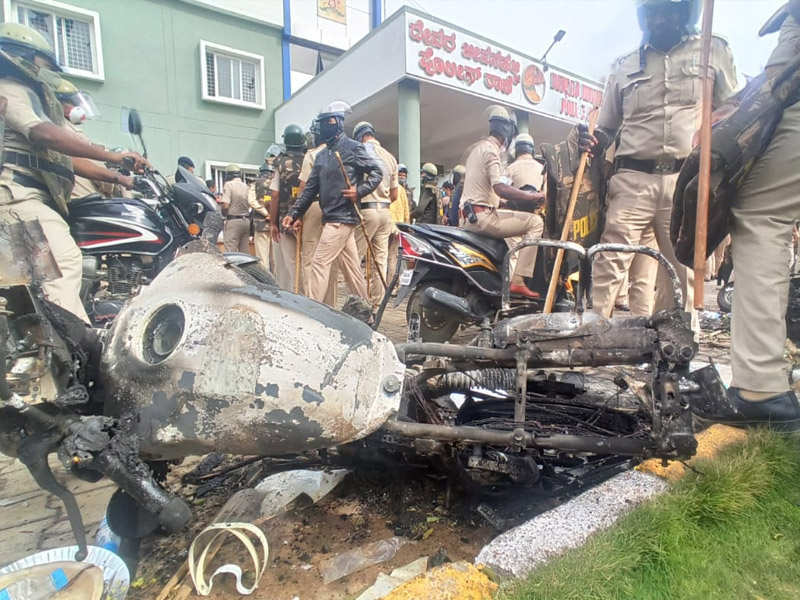 Taking cue from UP, Karnataka may seize rioters’ properties

The drama began around 7pm in front of Pulakeshinagar MLA Akhanda Srinivasamurthy’s house and lasted till 2am. Things deteriorated after 10pm as mobs locked up KG Halli and DJ Halli stations and torched police vehicles. Additional reinforcements that rushed from various parts of the city to help colleagues at the two stations were at the receiving end of a barrage of stones, bricks, bottles and other objects at every step.

Police officers said streetlights were damaged and at several places they had to negotiate road blocks in the dark. Vehicles that rioters had damage or set on fire were pushed to the middle of the road to stop cops in their tracks. 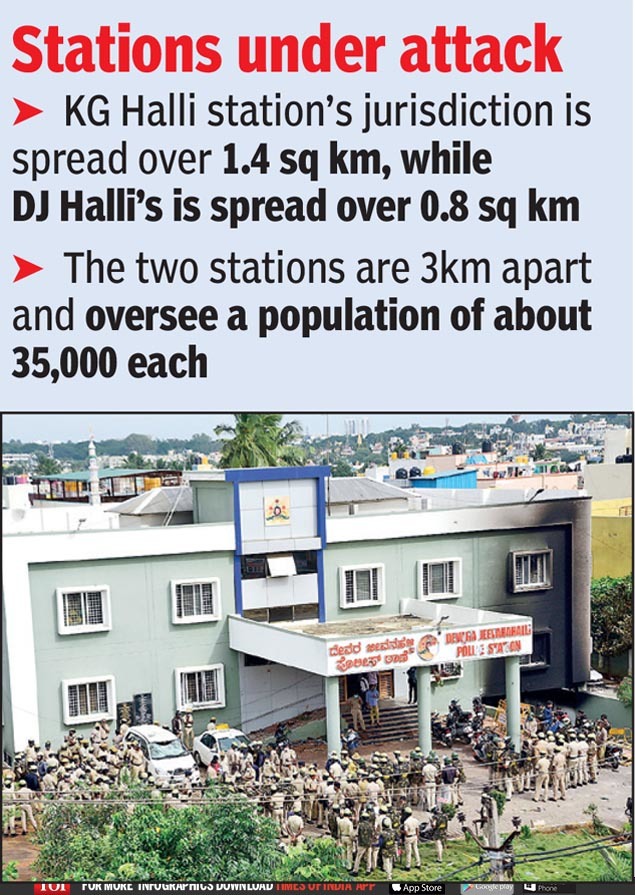 “Accompanied by 75 police officials, I had to walk through small lanes of KG Halli. Even as we were walking, stones were first hurled at streelights, plunging the entire area into darkness. The next moment, flower pots, stones of all sizes, bottles, tyres, wooden logs and bricks started raining on us. Our personnel’s protective shields broke and my men were injured. That is when we ordered firing in the air,” said police commissioner Kamal Pant.

A fire and emergency services fire truck that was passing through Tannery Road to reach KG Halli police station couldn’t make much headway as it bore the brunt of mob fury. “Two fire tenders had already reached the spot and were dousing vehicles set on fire. Half-a-kilometre before the station, a mob blocked our path. They smashed the glasses of our vehicle. We were pulled out and some of them started beating us. Luckily, a posse of armed police, who saw us, came running towards us, but the mob surrounded them too,” said a fire brigade personnel.

The narrow lanes of KG Halli provided the mobs the perfect opportunity to corner police and attack them, said another senior police official. “Mobs were everywhere. We’d cleared one and another would emerge on another road. They weren’t all locals,” he said.

“Only after several rounds were fired in the air and tear gas shells lobbed did the mobs begin to retreat. Religious preachers and political leaders arrived too, but it was too late,” the officer added.